Kati Vasti
Ayurved has described some nutritive, palliative type of Vasties, such as Kati, Hridaya, Udar, Netra, Shiro etc, which are externally placed in localized areas, such as low back, heart, abdomen, and eyes. We have already explained the Netra and Shirovasti. Let us know about Kati Vasti.

It means retaining oil over the lower back with the help of container prepared of either black gram or wheat dough. This form of external Vasti particularly benefits muscle spasm and rigidity of the lower spine and strengthens the bone tissue in that area. 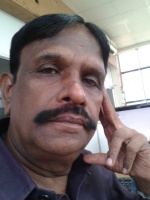